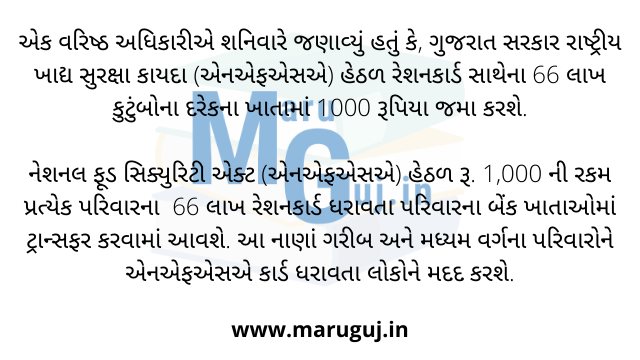 A senior official said on Saturday that the Gujarat government would deposit 1,000 rupees into the bank accounts of each of the 66 lakh families with ration cards under the National Food Security Law (NFSA).

Under the National Food Security Act (NFSA), an amount of Rs 1,000 will be transferred directly to the bank accounts of each of the families who hold 66 lakh ration cards. This money will help poor and middle-class families with NFSA cards. 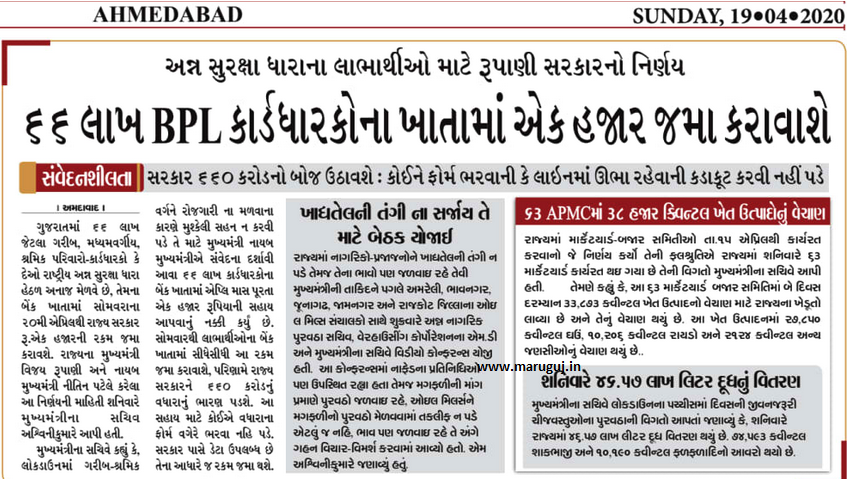 From April 13, 2020, 60 lakh cardholders of the state’s APL1 will be distributed free of cost from 17 thousand government-approved cheap grain shops. Such families will have to carry Aadhaar card with APL1 card as proof of identity This cereal distribution will be completed in five days from April 13 to April 17.

Chief Minister Vijay Bhai Rupani recently made a sensitive decision, announcing that about 2.50 to 3 crore people of 60 lakh families having such APL1 cards in the state will be given free food grains in April, now, since April 13, such cardholders have been given family. Distribution of 10 kg wheat, 3 kg rice, 1 kg pulse, sugar and 1 kg salt per 10 kg.

According to the government announcement, people with ration cards will be given the ration from April 1, so friends can check if the ration is available for you from the following website.

Check the ration you deserve or not read below post

Join Our TeleGram Channel
Join Our Whatsapp Group
Follow Us